Purchasing an anti-ram perimeter security fence system is only half the financial battle to securing a property’s border against vehicle-borne attacks—what still looms is the cost of installation. Contractors, architects and owners can realize significant savings by looking beyond the initial purchase price of the fence system and exploring the steps, materials and equipment necessary to complete the project.

Extensive amounts of hardware, intermediate posts, wire rope and concrete are all requirements of traditional cable-based fence systems that drive up the total project cost and lengthen the construction schedule.

Ross Technology’s XL-501 Post and Beam Fence eliminates these components to cut installation costs nearly in half while providing crash-tested certification to ASTM F2656 standards, with a M50-P1 rating.

Over a 1,000 meter span, cable-based fence systems can include up to 20 anchor posts and 380 line posts, which support multiple runs of cable. With up to 400 post holes in just a 1,000 meter stretch, the cost of materials and labor hours begins to add up quickly when you consider that each hole requires auguring, concrete fill and a rebar cage.

To effectively prevent vehicles from penetrating the fence, spools of cable must be run in multiple lines—sometimes up to eight—through line posts and anchor posts in time-consuming fashion. The whole system also requires a significant amount of hardware to maintain its safety standards, using cable clamps and nuts to tension each cable.

Furthermore, the maintenance and work isn’t finished when the cable-based fence install is complete. Cables must be checked and re-tensioned periodically to adjust tensioning and maintain the fence’s ability to prevent vehicle penetration.

All of this work is above and beyond what’s needed to install the XL-501 Post and Beam Fence. 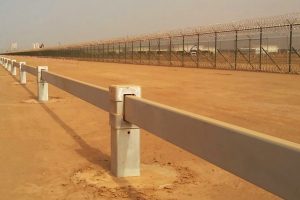 A single tubular beam is connected by one nut and one bolt at each post, greatly simplifying the installation process of the XL-501 Post and Beam Fence. Photo provided by Ross Technology.

XL-501 as a Solution to Installation Woes

Ross Technology’s solution to the anti-ram fence installation dilemma is straightforward—simplicity in design.

Vertical anchor posts are spaced 30 feet apart and connected by a single tubular beam fabricated with patented technology that absorbs the energy of a crash as opposed to relying on multiple runs of wire rope and the line posts that support them. The result is 110 posts in a 1,000 meter span, versus the 400 posts used with a cable-based fence system. That’s nearly 75 percent less holes to dig—and that’s before factoring in the different-sized holes, and the time it takes to switch back and forth between auger bit sizes.

While the rebar cage must be priced and built separately with a cable-based fence system, Ross Technology includes rebar sticks in every proposal. To install, contractors simply insert the rebar into pre-drilled holes in the anchor posts. The XL-501 Post and Beam Fence is the only anti-ram fence system that does not require additional rebar. No extra expenses, no extra labor to build elaborate cages.

In addition, Ross’ Post and Beam fence has been engineered to be extremely simple and efficient in terms of the hardware used and the effort required for construction. In fact, each fence section is made up of a surprisingly small number of components—two posts, one beam, one nut and one bolt per post to secure the assembly, and a top cap to protect it. 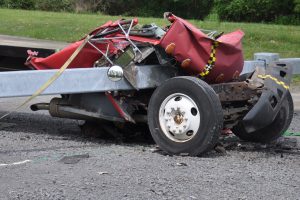 Big Savings: Benefits of the XL-501 Post and Beam Fence

Digging 75 percent less post holes speaks for itself, but the XL-501 Post and Beam Fence directly saves time, and labor costs, in several other ways:

This simplicity in installation, coupled with high crash test standards, led to the XL-501 Post and Beam Fence being specified to protect a Saudi Aramco facility, the world’s largest oil and gas company. The Saudi Aramco crew installed the post and beam fence at a rate of 1,000 meters per week with a relatively small crew—this is a process that is two to three times faster than installing a cable-based fence system.

“Installation of the XL-501 Post and Beam Fence saved us a tremendous amount of time, at least 50 percent versus other fence systems,” says Peter Saroufim at BRC Industrial (Saudi) LTD, in Jeddah, Saudi Arabia. “There is less excavation and less concrete to use. The whole process is much simpler, and you’re left with a product that does an exceptional job of protecting a perimeter and will not need any maintenance once it’s installed.”

As Perimeter Security Product Manager, Scott Espensen oversees new product development, product testing, sales, project management and fulfillment. With a strong background in controls technology for the United States Air Force, Scott has been very active in creating and sourcing advanced control systems for Ross Technology Perimeter Security products. He has worked at Ross Technology for over 20 years, and during that time Scott has overseen numerous security projects in the Middle East. He can be contacted at ScottE@rosstechnology.com.